If you had an engine that randomly would begin rev limiting itself, would always work fine for the first hour or more of operation, and otherwise always ran smooth even when rev limiting, what would you think the problem was?  Slipping throttle cable?  Bad fuel pump timing?

Oh, so you’re the smart guy that thinks it’s the fuel filter.

Ok mechanical genius. What if I then said it started working again after the engine cooled off. Explain that smart guy!?

Normally, when a fuel filter is dirty or a fuel line is clogged, and engine will idle rough and sometimes be difficult to start, and always get’s worse over time.  In this case, the problem “rev limit” would come and go, and only happened when the engine had been run for more than an hour.  Sounds more like a heat problem, right?

I even had an ‘expert’ mechanic look at the engines in Panama and he couldn’t find anything wrong. I called a couple of Yanmar dealers, and they were no help either.

It took two half brained pilots(Dave and I) to figure it out.  I guess two wrongs do make a right after all.  😛

For the sake of crew 4, or for anyone that ever has a Yanmar 4JH4 series engine, the following is a description of the problem and the solution.

On the 4JH4, Yanmar built in a manual fuel priming bulb(a little hand pump on the side of the engine that looks like a bell, with a spring underneath)  It is attached to the fuel filter housing, and is inline with the fuel lines to the intake side of the injection pump.  The idea being you can pump this thing a few times after you change a fuel filter or work on the engine.  In other words, it helps you bleed the fuel system of air. 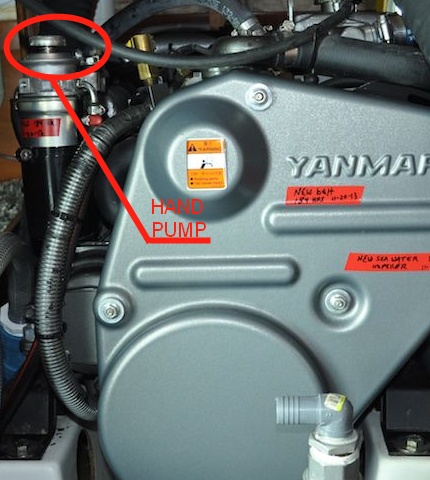 The old fashion way to bleed diesel fuel systems was to crank the engine over and over while you crack the line to an injector(old timers know this trick), until you spray fuel all over the place.  Clearly a real clean, and starter sparing operation.

Most modern engines build in a self bleeding feature to avoid the mess. Yanmar does too, but then they go a step further, and their solution should never effect the engine in normal operation, right?

Turns out that Yanmar, by accident or design, built the hand pump return orifice exactly the right size to pull in enough air to limit the engine to run exactly 2100 rpms.  How do I know that?  Because Reliant has two of them, and they both did the exact same thing.

What caused the restriction?  Just fuel filters.  Not so clogged that they didn’t work, but enough to create the ‘rev limit’.

So do you call this a flaw in the design, or failsafe?  Since I read the service manual cover to cover twice, and found no indication of the ‘issue’ in the troubleshooting guide, I’m going to call it dumb luck.

What’s the good news?  You don’t have to install an inline suction gauge to read the condition of the fuel filters on a 4JH4 install.  Just wait until the engine stops reving past 2100 rpms.

One thought on “WHEN A YANMAR DIESEL RANDOMLY REV LIMITS”