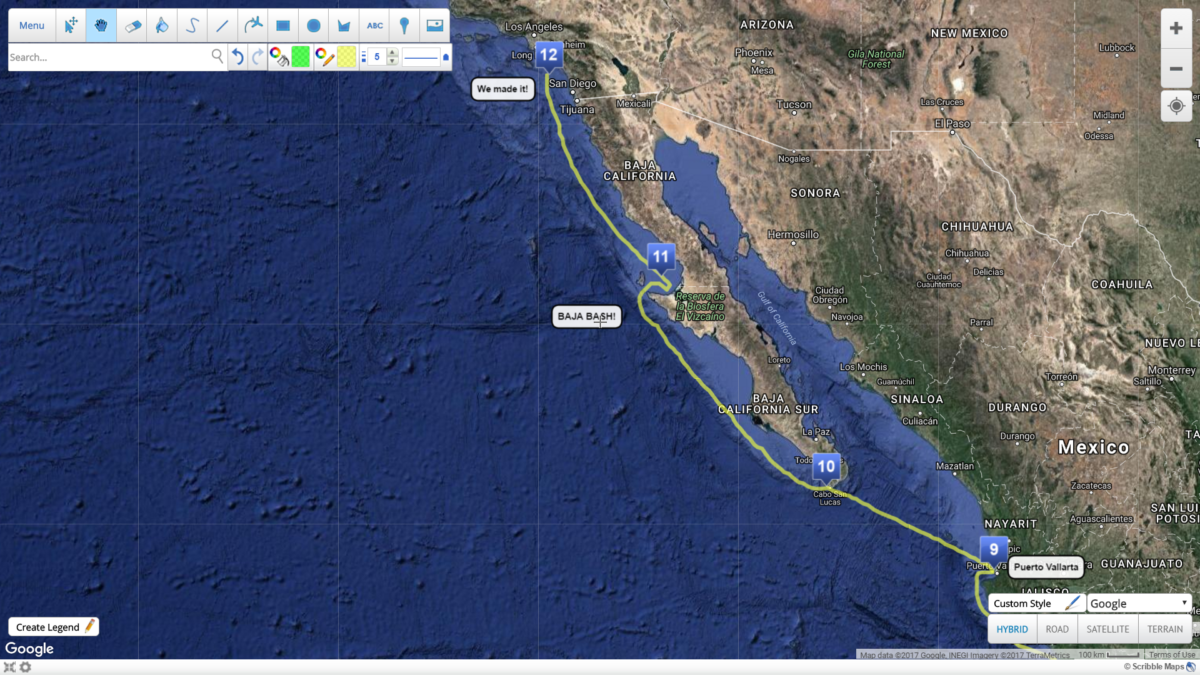 Reliant made it to Baja!  We knocked out another 800+ nm, and are finally on the same coast line as California!

Wednesday after Christmas, we arrived in Acapulco to a messy boat.  The end tie that we thought was such a cool rockstar parking spot turned out to be a bird poop magnet.  In all the places we’ve left the boat over the summer, I’ve not yet returned to the deck conditions we discovered in Acapulco.  It was like the Pearl Harbor of guano attacks!

I spared you pictures, but suffice it to say we spent a lot of time cleaning underway.

Departure from Acapulco was mostly uneventful.  We encountered un poquito problemo with the ship’s agent over paperwork, and there was a small frustration with some canvas work that turned out modestly rougher than I’d anticipated. Hard to imagine me actually not happy with work quality on the boat, right?

According to Nathan, the negotiations were somewhat…’heated’ I believe was the word he used.

The upside is we finally have a working full enclosure for the fly bridge. It’s a must have for heading up the coast this winter, and it turned out we got it just in the nick of time.  The average night time temp dropped near 30 degrees from the coast at Acapulco to the mouth of the Sea of Cortez.

Seabirds, and crocodiles, and whales… oh my! 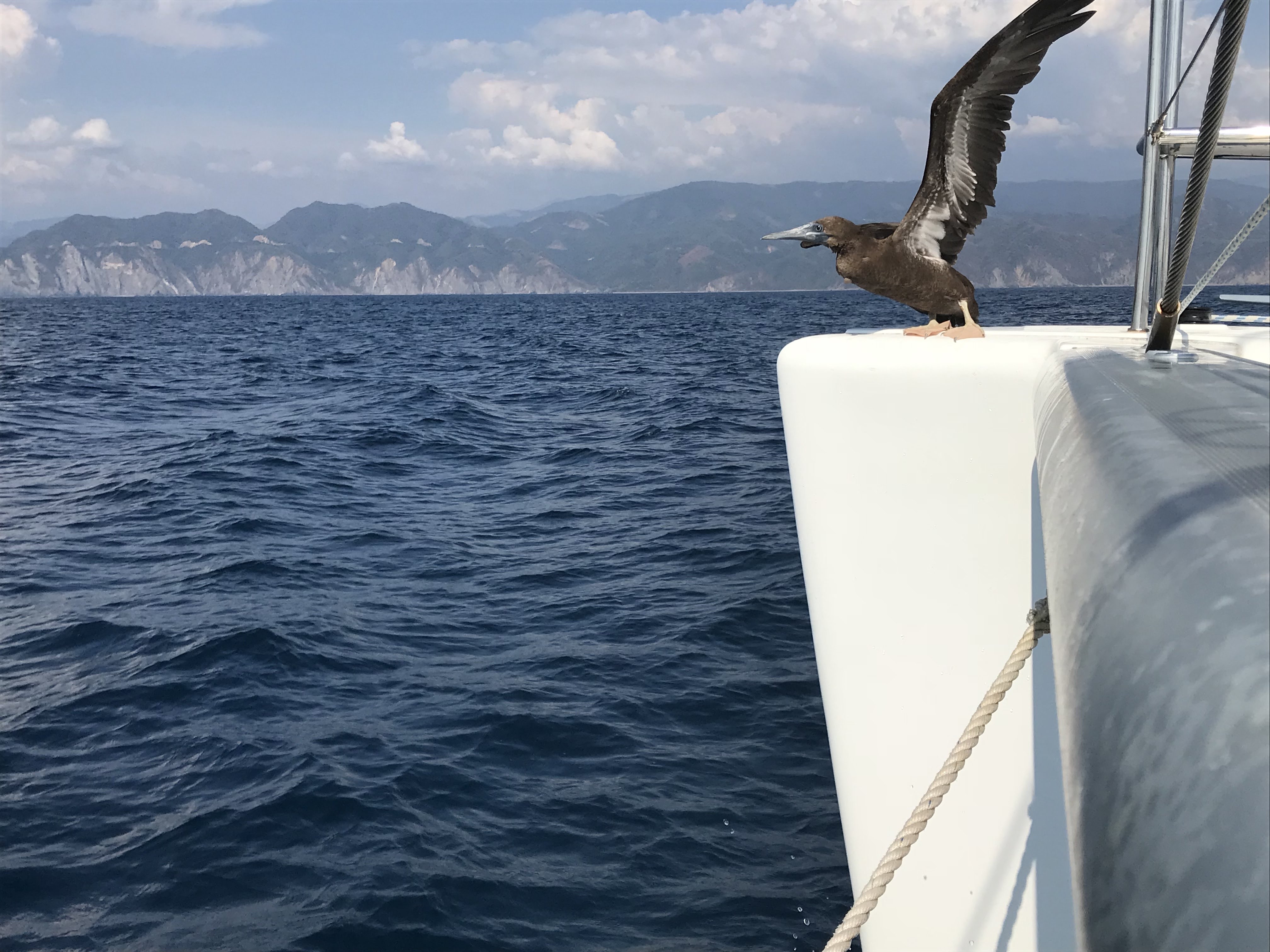 I’ve selected three pics to illuminate our encounters with wildlife on this leg.  The first being Pablo Pajaro(no relation to Pablo Dinkins).  He made numerous carrier landings on the bow, and rode not one, but two days perched atop the forepeak as we traveled up the Mexican mainland coast. 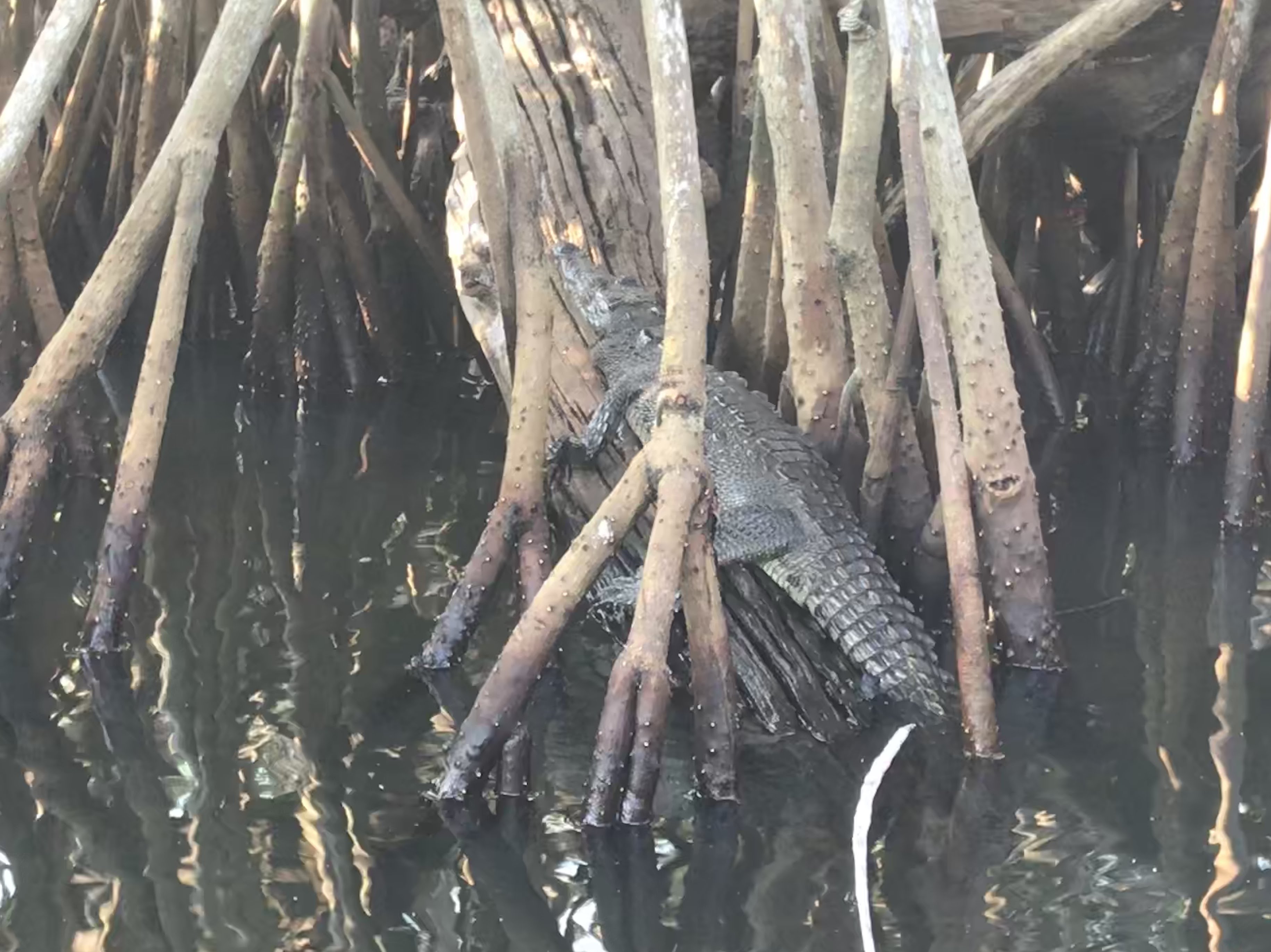 The second was one of the Crocs we saw on the river expedition in Tenacatita.  Liam took point and I ran the skiff.  There was some controversy over whether these were actually Caymens vs. Crocs, but my sources called them Crocodiles, so the captain ruled Crocs.

The third speaks for itself, all though we aren’t sure if they were grays or humpback.(videos in the Leg photo album at bottom) 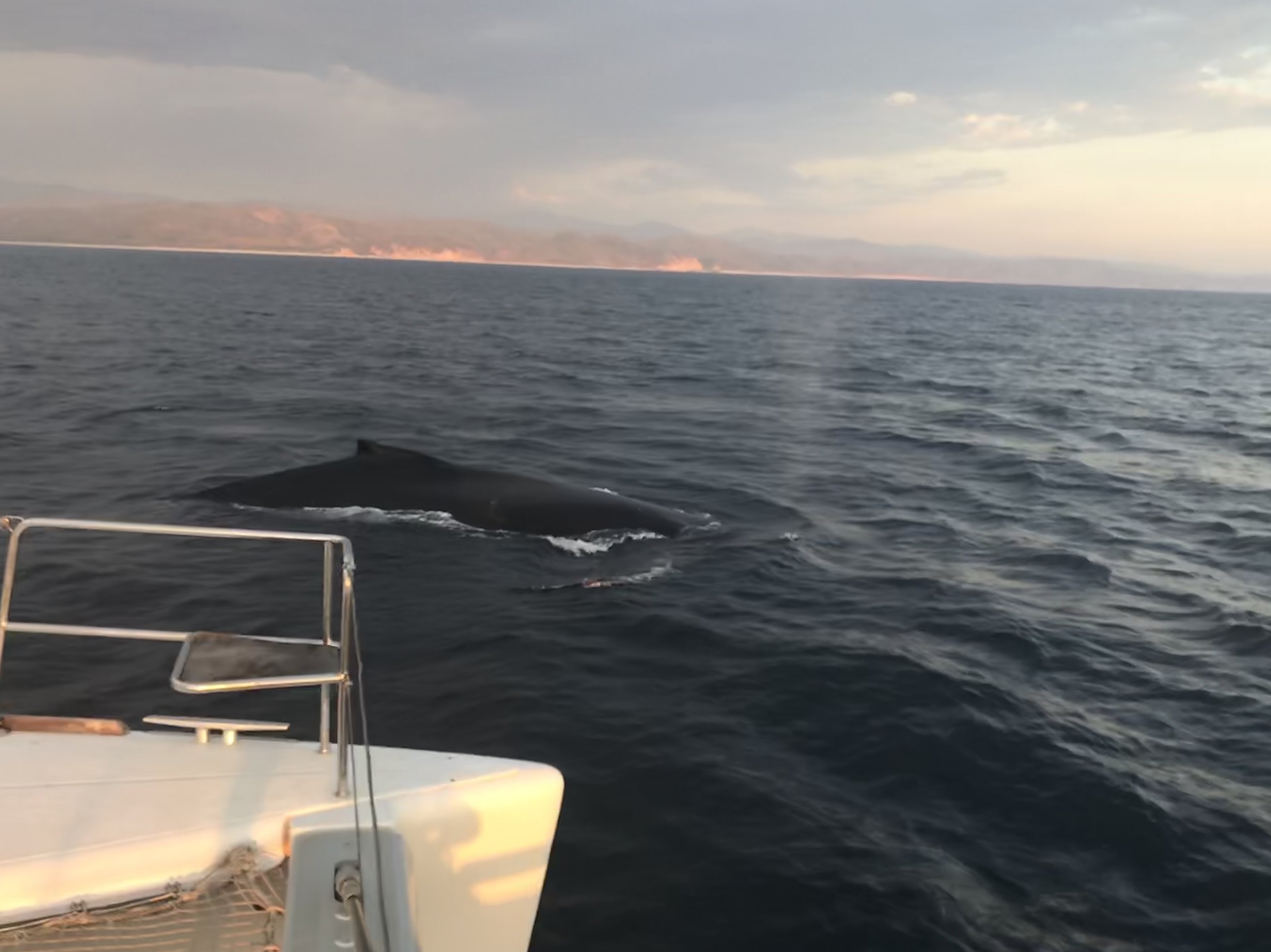 Trip up the coast from Acapulco was sweet.  No significant weather.  No wind, but flat seas made it fine motoring.

We stopped in Tenacatita for the river trip mentioned above, which is a five mile river that runs up from the beach and ends at a large lagoon.  Neat change of pace for anyone transiting the coast line down near Mazatlan, and the anchorage is great.

Further up the coast we stopped in Bahia de Chamela.  Chamela get’s the must stop award for leg 7.  For some reason, the anchorage was completely empty, except for a few Mexican pangas and a nice Canadian couple in a 40′ sloop.  Great beaches with really cool local bars on the beach.  Groceries near by, and plenty of cold cerveza.  If you are heading down the coast and looking for a relaxing place with just the right mix of activity and quite, try Chamela.

We bypassed Z-Town(Zihuatanejo) and Puerto Vallarta to get some of the crew to Cabo in time for flights.(the big R will be back down someday so no problemo)  We departed Chamela direct for the tip of Baja and spent New Year’s underway.

ADVICE FROM THE CAPTAIN
When you’re in a deep peaceful sleep, with the comforting drone of a marine diesel inboard in proper calibration drowning all worries away from the outside world, and you are suddenly jolted awake by the sharp loud crashing clanking sound like that of a sail drive transmission that has suddenly exploded and is allowing thousands of gallons per minute to flood the compartment that is directly behind the bulkhead of your captain’s berth, try not to have a heart attack as you leap out of bed to save the ship… it’s just Liam banging on a frying pan to ring in the new year…

Oustide of that, New Year’s was a blast on the Reliant.  Really!!

Arrival to San Jose de los Cabos was ideal.  The marina is expensive, but probably worth the price.  Brand new beautiful docks, neat restaurants and facilities at the top of the gang way.  Our local hangout has already become el Marinero Barracho!(the Drunken Sailor)  I can’t think of a more fitting palapa style Mexican bar to greet the crew of Reliant.  The fish and chips are even decent, but what is it with Mexico and vinegar?  A sailor don’t eat anything without malt vinegar! They act like they’ve never heard of it down there. Weird.

Anyone who wants to head down for a weekend, give me a call!

Cultural Addendum:  Nathan and I spent the day in Ciudad Mexico, where we explored the mysteries of the church of Rome in the largest cathedral in North America, Metro Cathedral of the Assumption, toured the remains of the Aztec temples of Tenochtitlan(the dudes the Spanish took Mexico City from), and spent a cultured afternoon at the Museo Nacional de Arte. Never fear, we are still Americans, we like American food, and we speak American, which makes google translate all the more important in a foreign country.

Reliant is currently on the east side main channel docks at Puerto Los Cabos Marina, Mexico

One thought on “(7) Acapulco to Cabo – COMPLETE”