Starting from the Florida Keys in mid-April, the basic route roughly follows the eastern coast of Mexico and Central America to the Panama Canal, across Panama to the Pacific, and back up the west coast to California.

The general idea is to have the boat near Panama by the hard start of hurricane season, August 1st.  The last time a hurricane made landfall in Panama was 1969, and by the time it reached Panama it was downgraded to a tropical storm.

Once through the canal, and depending on the intensity of the hurricane season, the route will continue up the Pacific coast, hopefully reaching California by the end of December. 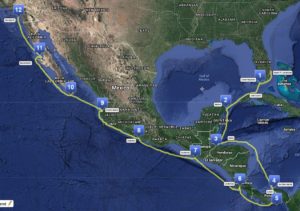