Most of you know I’ve talked about replacing good ole’ Sierra Wind with a cruising catamaran for a long time.  My brand of choice has been LAGOON.  Certain features, including the fly bridge concept, and the generous sized engines Lagoon chooses, reminded me of a “Sierra Wind” with two hulls.  I started looking at 440 and 450 Lagoons nearly ten years ago.  Despite the nice size of Sierra Wind compared to other 36′ sloops, a 440/450 would be more than double her total size.

Well, it took me awhile, but I’ve finally done it, and I really took the plunge on the size scale!

In the ‘charter’ configuration, the 500 would be a 5 cabin boat, with two additional quarter berths, one in each bow section(quarter berth is a one man bunk).  The standard owners version is a 4 cabin boat, but the configuration of Reliant is a special 3 cabin owner’s version.  Each cabin features it’s own private lavatory and shower, with one quarter berth in the port bow. 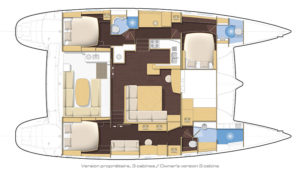